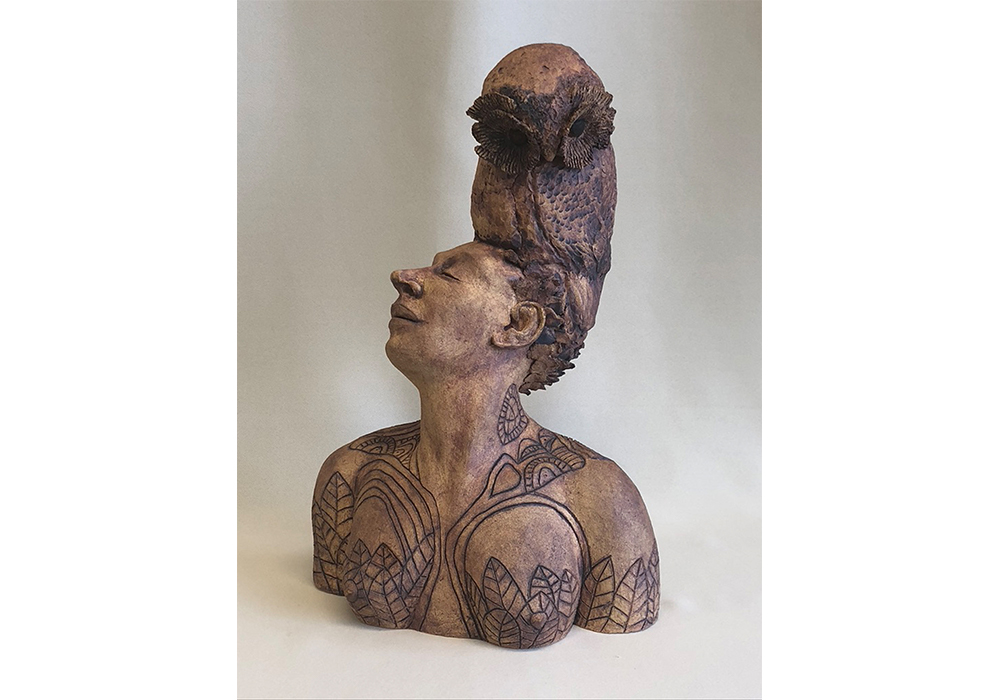 Evelyn Woods knows her birds. Each of the dozen, large oil-on-linen works adorning the walls of Smith & Vallee Gallery in Edison conveys a realism John J. Audubon would envy: a golden-crowned kinglet (“Waiting”), a varied thrush (“An Invitation”), five darkeyed juncos alighting in a snowy tree (“The Dinner Party”) and a pair of mourning doves in an oak tree contemplating coupling (“Assignation”).

Brilliant persimmons are the color highlight for a chestnut-backed chickadee in “Pause” and a barn swallow in “Abundance.”

Woods paints at her studio on Whidbey Island. Trees are also a favorite subject.

In her three “Ellensburg” oil-on-linen paintings — which I, at first, mistook for abstractions — she paints tree portraits “as one would a person,” seeking out the inherent nature of each and attempting to capture their distinct personalities.

Maria Wickwire’s ceramic sculptures, all female, are unique and beautifully molded by hand. She garnishes them with lovely, often surprising, natural objects that add meaning and mystery.

Birds perch on the figures as testimony of women’s gentleness. In “Love Me Like a Song,” a sculpted head culminates in a branch where songbirds rest. Another songbird appears in a work inspired by a poem: “The Answer to Every Question You Have Ever Asked” (ceramic, maple and bird’s nest).

I have read books on the subject of wounded women, but Wickwire’s works are the first visual treatment I’ve come across. Her females are mutilated. “Singing to an Ocean” features a blinded, nude woman encrusted with shells and barnacles. “Eilidh,” a Gaelic goddess who comes to liberate men from “traps of the earthly world,” sports antlers where arms should be.

Other armless sculptures are “Autumn Cascade” and “Elen of the Ways.” Elen, whose antlers are on her head, inhabits the “trackways and paths that cross both nature and the human soul.”

The sooty, dark subject of “A Wing and a Prayer” once again lacks arms, but look closely and you’ll find that her “breasts” are a second set of eyes. And “Standing Still and Learning to be Astonished” portrays a handsome, full-lipped head whose eyes are wrapped — standing so still that a crow rests on her head.

Perhaps Wickwire is telling us that the loss of one sense sharpens others and that a lack of sight conveys a deeper understanding. A clue is the bust entitled “Samara” who tilts her head and closes her eyes, assisted by an owl (the symbol of wisdom) resting on her forehead.

Wickwire’s work fosters so many questions. “Mother, Mother Ocean” is a striking piece — but why does the beautiful sea-creature contemplate a rusty (ceramic) chain? Hopefully, we can be like the beauty in “Dopo L’Incendio,” who looks upward confidently, even though her right breast has been scorched.

The most peaceful, even transcendent, work of Wickwire’s is “Lakshmi” (ceramic, glazes and metal). This beauty is whole, crowned, adorned with ferns and seaweed; she contemplates a blackbird that rests upon her hand.

Don’t miss the superb images by Pamela Wachter (oil on canvas and mounted on board) in the Flex studio. After a 25-year-career as a commercial designer and illustrator, she now returns to fine art with restful, luminous visions of our Northwest landscapes — peruse “After the Rainshower” and “Homeward Bound,” and I think you’ll agree they’re worth a second look. Works by painter Evelyn Woods and sculptor Maria Wickwire can be viewed from 11 a.m. to 5 p.m. Thursdays through Mondays

until May 1 in Edison at Smith & Vallee Gallery, 5742 Gilkey Ave. Info: smithandvalleegallery.com