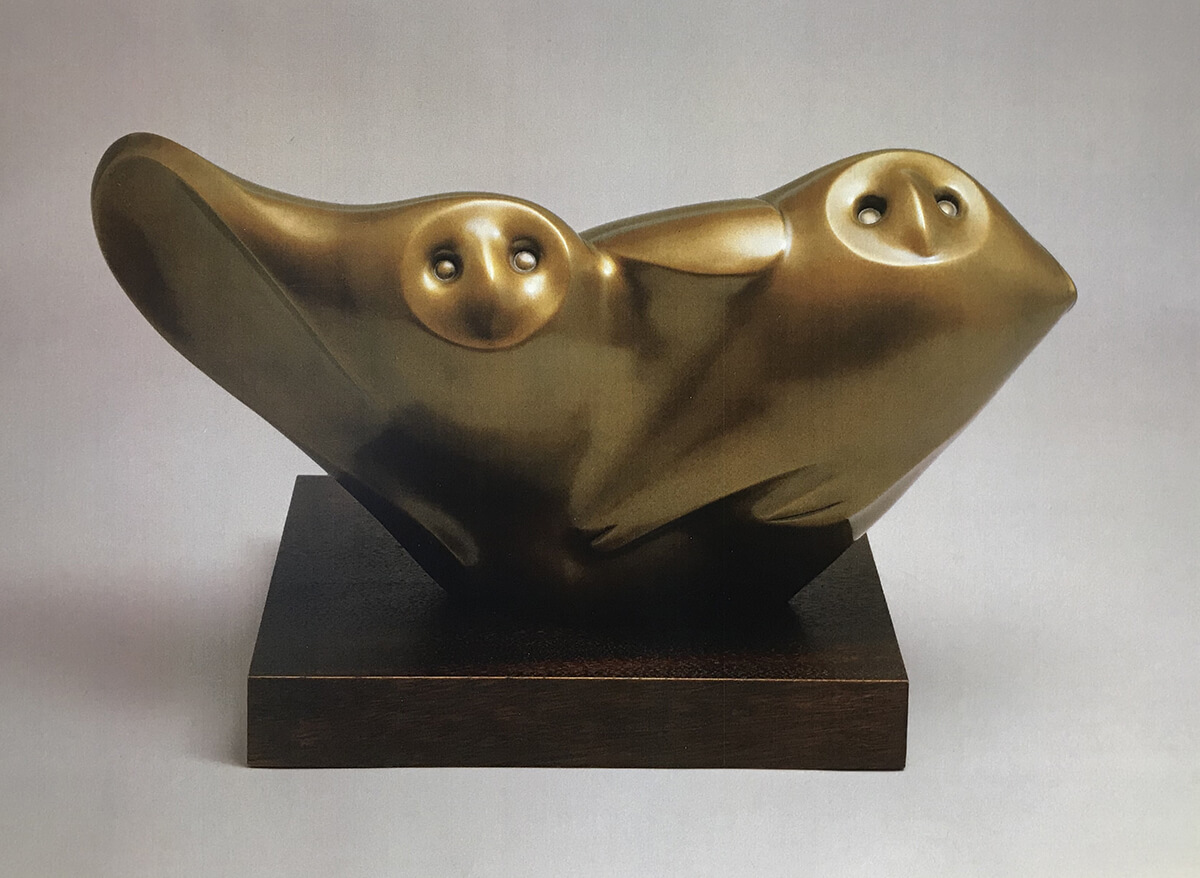 Philip McCracken deals with the infirmities of age by focusing on his creative passion.

Those who visited Skagit County recently to see the acres of tulips know the beauty of this place — though it’s not limited to Mount Baker looming over the country roads that run along the fields of flowers.
It’s also found in quiet places along the dikes, in birds nests, in the songs of birds, among the forests, on secluded Salish Sea beaches and in the night sky.  Representations of this beauty can be found through May 27 at the Smith & Valley Gallery in Edison. It’s worth the trip. The gallery is known for showing some of the best art of the Northwest, and the current exhibition is a masterpiece.  It features major American artist Philip McCracken, whose wood sculptures and bronze casts are found in the collections of art museums across the country and abroad, and Kris Ekstrand, a well-known Bay View-Edison painter and printmaker, who previously served as a director of Seattle’s Northwest Bookfest and the Museum of Northwest Art in La Conner and worked at the North Cascades Institute.

In this exhibit, Ekstrand and McCracken celebrate the love of place. Skagit has given many artists their inspiration.
McCracken will be 90 in November. After 60 years of hefting wood and metal in his studios on Guemes Island, arthritis keeps him in a wheelchair.  “Phil deals with the pain by shifting his focus to his passion,” said La Conner’s Tim Bruce, who owns one of the best private collections of McCracken’s work. “He talks about continuing to contribute. His incredible mind is still thinking about what he could do next.”

It’s true about that focus. Even in the midst of his major retrospective show titled “600 Moons: Fifty Years of Philip McCracken’s Art” at MoNA in 2004 and the release of an accompanying book by longtime Seattle arts writer Delores Tarzan Ament, McCracken did not bask in the praise or promote himself. He kept working.
He is a recipient of the 1994 Washington State Governor’s Arts Award. His work is displayed in public installations locally and throughout the state. He has inspired poets, and he and his wife, Anne, were instrumental in the launch of the nationally known Skagit River Poetry Festival.

McCracken is perhaps best known for his iconic bird and animal sculptures — such as “Mole Greeting the Sun.” His work in the Smith & Vallee show includes pieces from nearly all of his artistic periods — his lyrical pieces, views of the night sky, a dark look into the future past, the potato, raptors, totems and other series.
In Bruce’s home sits “Piping Rabbit” — a chubby rabbit playing a tin whistle. “I see Phil in the rabbit,” Bruce said. “It’s his creative spirit, his humor, his soul, his commitment to perfection.”
In a book about McCracken published for the Tacoma Art Museum in 1980, author Colin Graham describes the artist:
“One might assume that McCracken is a Northwest regionalist, and to a certain extent he is. The owls, hawks and ocean forms, whose shapes he defines with such precision and intensity are in one sense pure Northwest phenomena.

“Yet a second glace at his carvings is usually enough to reveal that under the surface these wild creatures are simply vehicles for human emotions and predicaments. While the outer shell may be animal or regional, the inner content is apt to be human and universal.”

McCracken grew up in Anacortes. He served in the Army and fished commercially. At the University of Washington in the early 1950s, sculptor Everett DuPen encouraged McCracken to follow his heart. McCracken also met ceramicist Paul Bonifas and “Northwest School” painter Morris Graves, each who had a great influence on the young artist.
After an apprenticeship with the great British sculptor Sir Henry Moore, McCracken tried living in rural New York. He was represented in the city by the Willard Gallery, which had introduced New Yorkers to the likes of Graves and Mark Tobey.

Something was missing, however. The moody skies and the damp woods of the Pacific Northwest beckoned, and he moved back to live with his family on Guemes Island, just across the channel from Anacortes.
“Phil owes his life to Guemes,” Anne McCracken said.
Ekstrand understands why McCracken had to return to Skagit County. “His childhood influenced his work,” she said. “It’s not just his love of nature. It’s his knowledge of life and science and family.”
Ekstrand is showing monotypes, large scale drawings and paintings on canvas. Along with the Smith & Vallee Gallery, her work has been shown at Everett’s Schack Art Center, the Bainbridge Island Museum of Art, MUSEO on Whidbey Island, Moses Lake Museum, and at colleges and other galleries throughout the Northwest.
She earned her fine arts degree from Pacific Lutheran University and studied painting and drawing with the great William Cumming at Cornish College. All through her other jobs, Ekstrand was still making art. Now in her late 60s, Ekstrand has lived most of her adult life in Skagit County, having moved to Mount Vernon in the early 1980s when her husband, Carl Molesworth, became editor of the Skagit Valley Herald.
Much of Ekstrand’s landscape work in this current exhibit focuses on the intersection of farmland and estuarine tidelands. “We are never really free of the ecological tension between the beauty of the sloughs and the historic and current demands on the river valleys,” she said. “I love this place, but that’s under the surface.”
A favorite is from Western Washington’s recent long, wet, dark winter — a monotype titled “Big Dark III.” It is dark and mysterious, yet alive and beautiful.
Exceptional, too, are Ekstrand’s bird nests, a series also displayed currently at Bainbridge.
“People kept bringing me birds’ nests from our landscape,” she said. “I liked the architectural nature and the primitive quality, the centrifugal force and the energy. The nest is a retreat, a refuge, and a shelter that ultimately represents a departure and a loss.”
Ekstrand is honored to be in an art show with McCracken.
“He’s one of the first artists I met when I moved to Skagit County,” she said. “Phil is a master in every way. He is humble. He lets his work speak for itself.”
Former Daily Herald reporter Gale Fiege wrote an award-winning piece about McCracken in 2004 for the Skagit Valley Herald. She can be reached at gfiege56@gmail.com.
If you go

Works by Philip McCracken and Kris Ekstrand are exhibited through May 27 at Smith & Vallee Gallery, 5742 Gilkey Ave., Edison. Get off the freeway at Conway, and travel northwest on Fir Island Road, which turns into Best Road, which becomes Farm-to-Market Road and lands you in the burg of Edison.
Hours at Smith & Vallee are 11 a.m. to 5 p.m. daily. More at www.smithandvalleegallery.com, or call 360-766-6230.